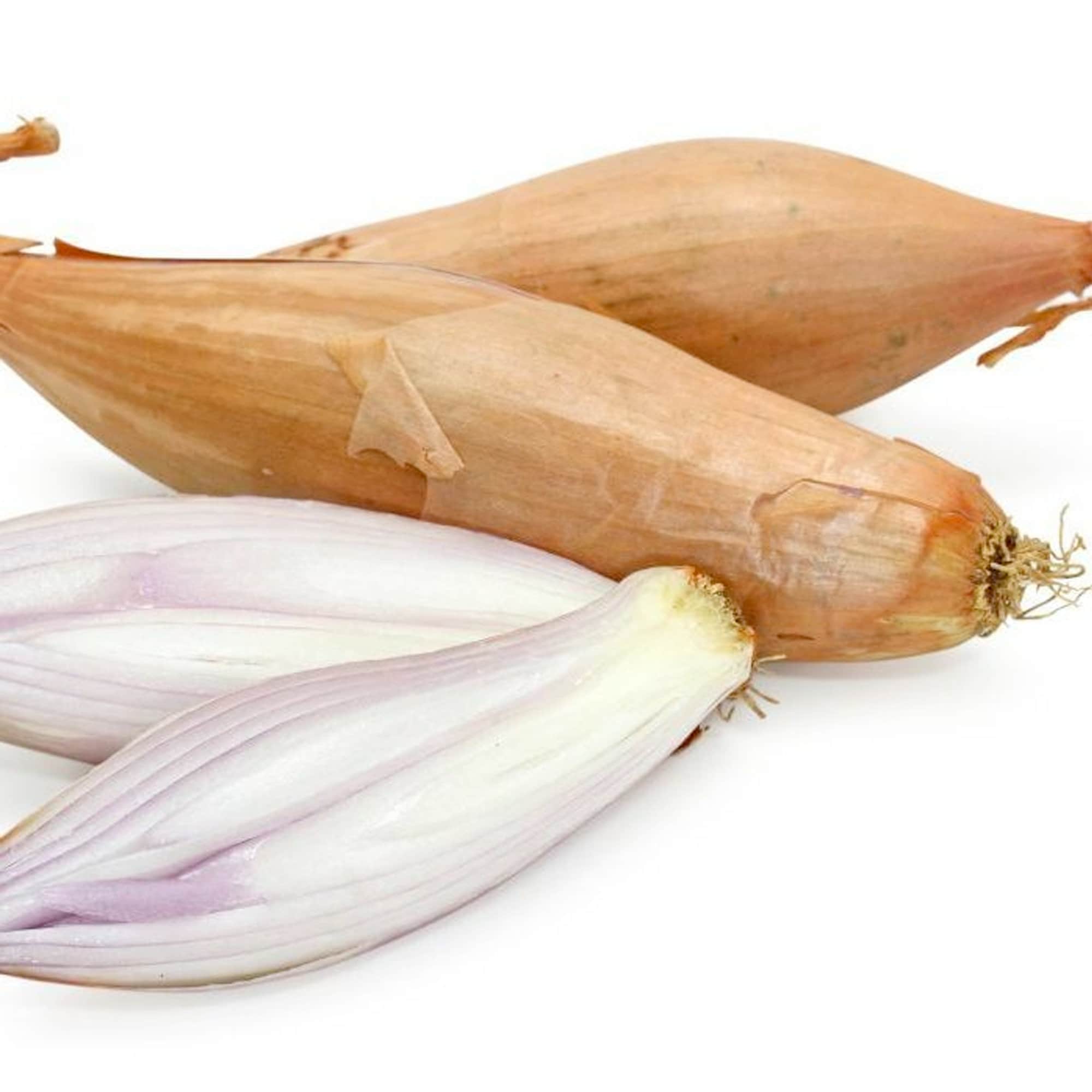 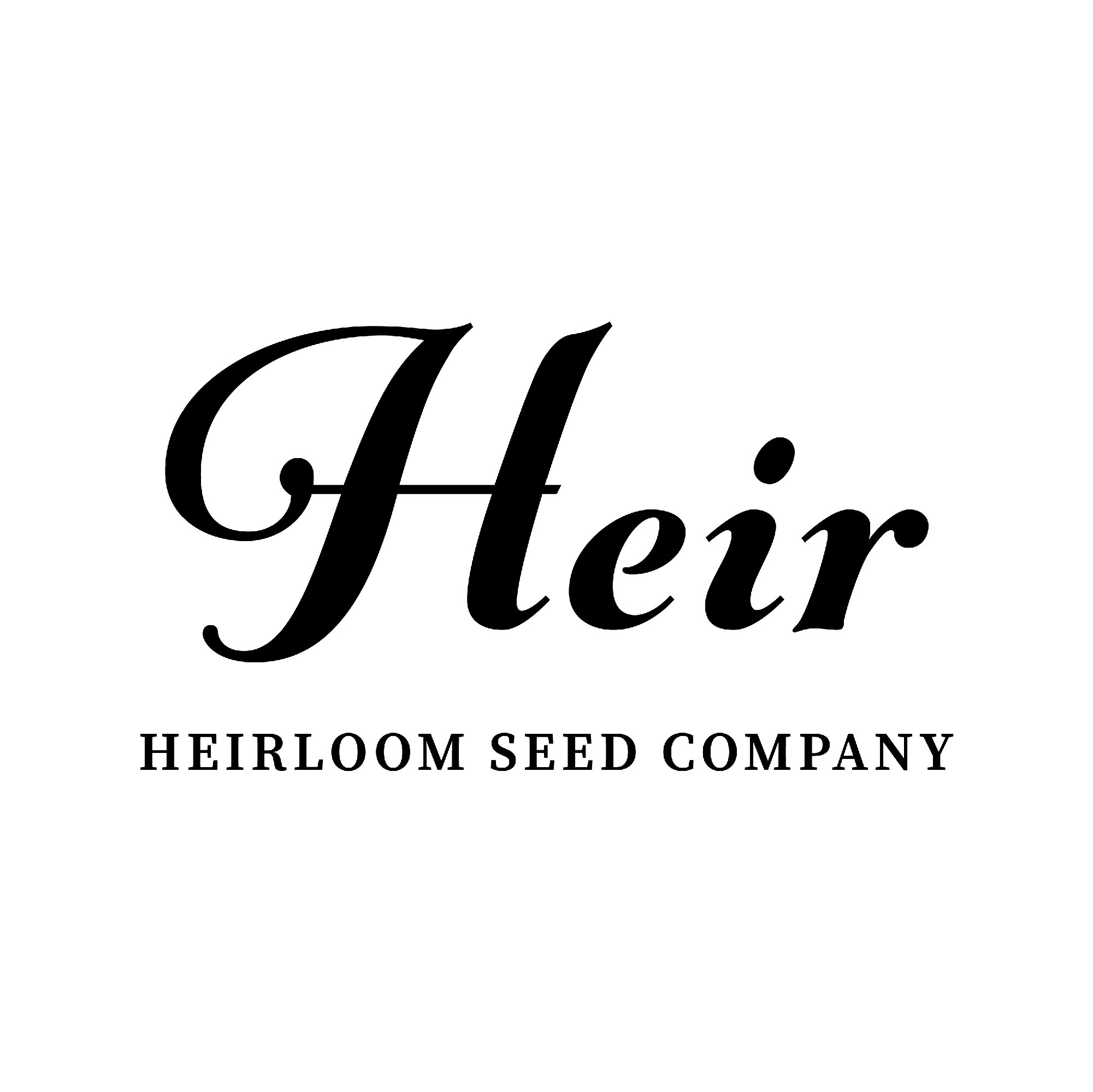 Shallot ‘Zebrune’ is a French variety also known as echelons, banana shallots or Cuisse de poulet which translates to chicken thigh. It has an elongated, tapered shaped bulb, copper skin, and white flesh. A cross of an onion and shallot that combines the sophisticated flavor of a shallot, the ease of slicing and peeling that comes from an onion. Hasgood resistance to bolting.

This type are often called ‘banana’ shallots in the cookbooks and are increasing in popularity for gourmet cooking. Zebrune produces a good yield of ‘easy to slice’ bulbs. They have an excellent eating quality with a mild and sweet flavour. Delicious when used either raw in salads or cooked with good-sized bulbs useful for storing.

The shallot is the attractive cousin of the the common onion. Whereas onions are big and brash, the shallot is svelte and sophisticated with an understated charm. In much of Europe, especially France, the shallot is treated with reverence and is used with intelligence and finesse.
Shallots have a sweetness and fragrance that sets them far apart from even the best onions. They have an almost winey quality when cooked that may explain their following in classical French cuisine.

Shallots are relatively expensive, so it is well worth growing your own. Easy to grow, they are less fussy than garlic and more productive than onions. It is now possible to have shallots without worsening the global financial crises!

Preparation:
Choose an open, sunny site with good drainage which has preferably been dug and manured in the previous autumn. Do not plant or sow on freshly manured bed. Lime if the soil is acid. Avoid planting in an area where the previous crop was of the onion family. Apply a general fertiliser if needed and rake the surface when the soil is reasonably dry. Tread over the area and then rake again to produce a fine, even tilth.

Timing: Sow in late winter to spring. January to April.
Seed-grown shallots are treated like onions, and can be either direct seeded into the ground or seeded into modular trays and transplanted. In cold areas and for early crops sow early in a propagator or under glass in January to February, or sow direct March to April once the soil has warmed. Harden off and transplant outdoors six weeks later.

Sowing:
Sow very thinly in 1.2cm (½in) deep drills, leaving about 25 to 30 cm (10 to 12in) between rows. Water very gently if the soil is dry, and cover with soil. When large enough to handle, thin the crop to 8 to 10cm apart. And replant thinnings. The roots must fall vertically in the planting hole and the bulb base should be about 1cm (½ in) below the surface. Plant firmly.

Cultivation:
Once the roots have taken hold, the tops of the bulbs should be kept a little above ground. If they are low in the ground, draw away a little of the soil surrounding the bulbs. Hoe carefully or weed by hand – dense weed growth will seriously affect yield.
Water if the weather is dry (not otherwise) and feed occasionally. Mulching is useful for cutting down the need for water and for suppressing weeds. Break off any flower stems which appear. Stop watering once the bulbs have swollen and pull back the covering earth or mulch to expose the bulb surface to the sun.

Harvesting:
When the shallot is mature the foliage turns yellow and topples over. (Some gardeners bend over the tops as the leaves start to yellow). Leave them for about two weeks and then carefully lift with a fork on a dry day.

Storing:
Inspect the bulbs carefully – all damaged bulbs should be set aside for kitchen use or freezing. The rest can be stored. The shallots which are not for immediate use must be thoroughly dried. Cure the bulbs in a dry warm well-ventilated spot until the tops are completely dry and the papery shell feels crispy. Under normal conditions, shallots will store longer than onions. Store in a cool dry place they will last well into the early summer.

Culinary Use:
Shallots are flexible enough to be sautéed, braised, caramelised, grilled, or added to stir fry. Substitute shallots for garlic in recipes - they are milder and blend with vegetables more easily and without an overpowering blast.

Origin:
Shallots are an ancient clustering form of the common onion. They are related, as opposed to being a younger version of it. Greeks and Romans both called the shallot the Ascalonian onion. The name derives from the name of the city of Ashkelon (Latin ‘Ascalon’) in ancient Canaan (now Palestine), from where it is believed that they originated. In Italian shallots are called ‘scalogno’.

Whats the difference?
Unlike onions where each plant normally forms a single bulb, shallots form clusters of offsets, rather in the manner of garlic. Most varieties of shallots are smaller than onions, have finer layers and contain less water, so are better for storing.
Their distinctive flavour of shallots is more delicate than that of onions, perhaps more intense. They tend to be considerably more expensive than onions, especially in countries such as the USA, where they are almost exclusively imported from France.
Shallots are also known as ‘eschallots’, ‘French shallots’, or ‘golden shallots’, when just shallots will do really. They are always in a tight cluster and look a little like small brown onions, only more elongated.
Unlike onions, shallots normally bloom white or violet flowers.

Why grow from seed?
Most onions may be grown from seed or from ‘sets’. Sets are produced by sowing seed very thickly one year, resulting in stunted plants which produce very small bulbs. These bulbs are very easy to set out and grow into mature bulbs the following year, but they have the reputation of producing a less durable bulb than onions grown directly from seed and thinned.
Choices of seed varieties is far greater than that of sets and growing from seed will let you choose varieties to suit your own needs, such as the desire for an early-season sweet onion or a late-season keeper.
Most onion experts agree that, diversity aside, onions grown from seed perform better than those grown from sets. They are less prone to disease, they store better, and they bulb up faster.
Growing from seed will give you first year onions that will almost never bolt to seed, are all edible and will store well. Seed will give a stronger bulb which is also more useful for pickling and for storing.